The Acropolis, Mars Hill, the Panathenaic Stadium, the ancient Agora... Hop on a segway and enjoy a very comfortable tour of Athens -what's more, you can even choose between two different routes. 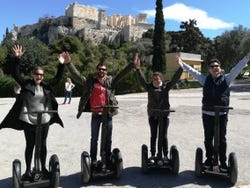 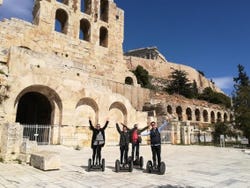 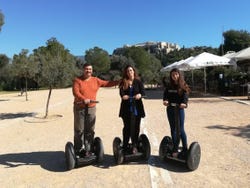 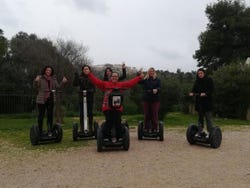 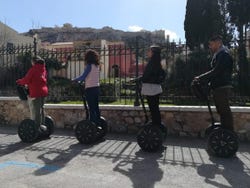 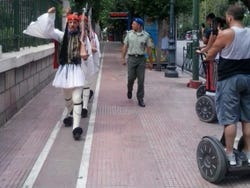 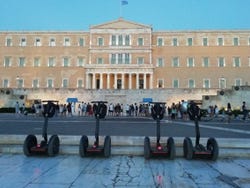 When making your reservation, you can choose between two options. Both options include an English speaking guide and have the same starting point at Aischinou Street:

We'll start the tour with a few brief instructions to learn the basics of handling the segway. Once we've gained some confidence on the segway, we'll start touring the oldest parts of Athens.

First, we'll head to the Kerameikos area, the ancient cemetery, and one of the many entrances to old Athens. We'll follow the same path used by the ancient Greeks to enter the Agora and the forum.

Our next stop will be Mars Hill to see the Acropolis in all its glory. On our segways, we'll admire one of the most iconic landmarks in the whole world. After taking some breathtaking pictures of the Parthenon, we'll continue our segway tour to explore Pnyka Hill, from which we'll enjoy one of the best panoramic views of the capital of Greece.

The best of Athens (3 hours)

If you're looking to explore all the landmarks in Athens without getting tired, this option is the one for you. We'll first go through the basics to learn how to drive the segways and we'll visit the all sites included on the two-hour tour of Old Athens: Kerameikos, the ancient Agora, Mars Hill, and the Acropolis.

To complete the tour, we'll visit the Panathenaic Stadium, where the first Olympic Games of our era were held. Before ending the tour, we'll be able to watch the changing of the guard in Syntagma Square.

All of our providers comply with local legislation and applicable health recommendations to avoid the spread of Covid-19. Show more

A safe distance of one metre between clients will be maintained whenever possible.

The use of masks is obligatory. The client must bring their own mask.

All those running the service (guide, driver etc...) will wear a mask throughout its duration.

Handing out of printed material such as maps or brochures will be avoided.

The temperature and wellness of all those taking part in the service will be monitored daily, excluding and maintaining in quarantine any who display fever or symptoms.

The transport used will be disinfected before and after each service and deep-cleaned every 24 hours.

Showing your voucher on your phone will be enough, and it is not necessary to print anything.

Alcoholic drinks are not available.

The activity takes place with a guide that speaks in English.

You can book up until 24 hours before the activity as long as there are still places. Book now to guarantee your spot.

All services published on Civitatis are carried out in accordance with our Sustainability Code. Specifically, this activity applies the following practices: Show more

No single-use plastics are used.

from
US$ 69.10
No hidden fees or surcharges
Free cancellation up to 48 hours before the service starts
Book

Free! Free cancellation up to 48 hours before the activity starts. If you cancel under this time or do not show up, you will not be refunded.

8.50 / 10 721 reviews
Join a 5-hour guided tour of Athens and visit one of the most important museums of the capital of Greece accompanied by a professional guide. Ideal for first time visitors!
US$ 98.40
Book
like

9.20 / 10 53 reviews
Are you traveling to Athens and don’t know what islands to visit? On this full-day trip to Agistri, Moni and Aegina, swim in crystalline waters and enjoy stunning landscapes.
US$ 158.20
Book
like

8.60 / 10 377 reviews
Explore Classical Greece on a full-day trip to the Corinth Canal, Epidaurus and Mycenae. You’ll delve into the history and culture of Greece by discovering the Argolis peninsula.
US$ 117.10
Book