The Athens Metro is not very extensive, but it is contemporary and runs smoothly. The subway’s three lines are run by two companies, although they share tariffs, travel cards and tickets.

Curiously, line 1 was the first to be built. Opened in 1869, the line connected Athens and Piraeus port and was run by a steam train until 1904, when the state introduced electric trains. The other two lines were introduced in 2000.

The lines are not only identifiable by numbers, but also by color:

Athens is currently working on the fourth line of the metro system which will open in 2026 and will extend from Petroupoli to Ethniki Odos.

While excavating the underground tunnels and stations, numerous buildings and items that had been buried for centuries were uncovered. To preserve these interesting findings, Athens dedicated part of the stations to display them.

Athens Metro runs approximately from 5:30am till 12:30am (midnight). On Fridays and Saturdays, the last train departs at 2am.

During peak hours, the metro runs every 3 minutes, and during the slowest hours, they run every 5 to 10 minutes.

For information on the various tickets, travel cards and fares, check out our article: Athens transport tickets 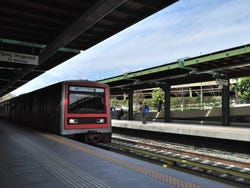 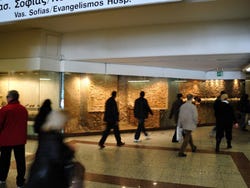