The houses in Anafiotika, erected on the northeast side of the Athenian Acropolis, were built mid nineteenth century by the expert builders who had been hired to build the Royal Palace for the first Greek King, King Otto. The construction workers, most from the Greek island Anafi and other Cycladic islands, missed their home and decided to establish a small housing area with the emblematic Cycladic architecture style on the Acropolis hillside.

Part of the houses were destroyed when the Acropolis was being excavated in the late twentieth century, but the remaining cottages have become a haven of peace which all tourist must visit. An island without its sea. 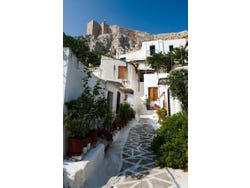 At the foot of the northern side of the Acropolis.