Currently, Delphi is a small tourist town on the slant of Mount Parnassus, with beautiful views over the Pleistos Valley and the Adriatic Sea. Most hotels and restaurants have excellent observation decks.

During the ancient classical world, Delphi was a prominent Greek sanctuary that attracted thousands of pilgrims every year. Countless travellers visited the town in search of advice from Pythia, the High Priestess of the Temple of Apollo.

It is believed that the Pythia would take substances to enter into a trance state and talk in gibberish, which would then be interpreted by priests into prophecies. Delphi was once the most important religious sanctuary in the ancient classical world.

What to do in Delphi

As well as exploring the town, strolling through its streets, discovering the pretty little shops and enjoying the marvellous landscape from its many panoramic bars, there are numerous things to do in Delphi. These are some of must-see attractions:

How to get to Delphi

Situated on the slope of Mount Parnassus, Delphi is a spiritual retreat. Its privileged location is only accessible by road. You can book a guided tour online, or if you would rather get there under your own steam, these are the best ways to travel to Delphi:

If you’re thinking of travelling around Greece at your own leisure, the best option is to hire a car. We suggest you combine the visit to Delphi with Meteora and the Monastery of Hosios Loukas. Click on this link to rent a car.

To get to Delphi from Athens, take the freeway E75 to Lamia for approximately 100 kilometres, take the exit Kastro and follow the signs to Levadia. Cut across Aráchova, a pretty mountainous village, and keep on the same road that will lead you to Delphi.

Athens and Delphi are connected by several public buses that run approximately six times a day in both directions. It is quite a comfortable option if you don’t want to rent a car. The buses depart from Terminal B (260 Liossion Street) between 7:30 am and 8 pm, and the journey takes three hours. We suggest you take the first bus and make sure to book tickets with enough time.

The best option to get to Terminal B is to take bus 024 from Amalias Avenue, close to Syntagma Square. 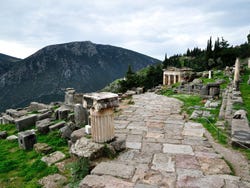 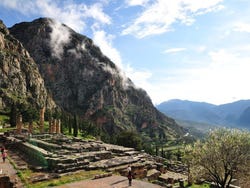 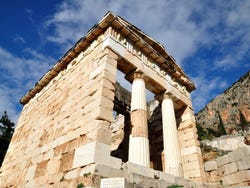 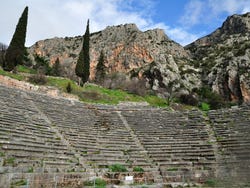 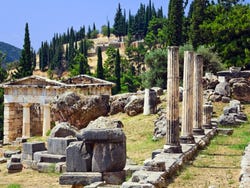 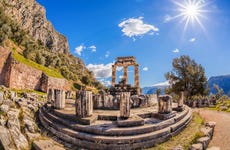 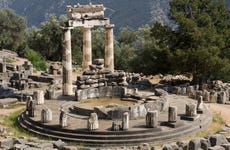