Hosios Loukas Monastery meaning “Esteemed Saint Luke” was not built in honor of Luke the Evangelist, but was established by the Greek monk Loukas. He was buried in the crypt of the monastery when he died in AD 953.

Saint Luke, born in AD 896, abandoned his home when he was an adolescent in search of spirituality. In the following years he became a healer, and was renowned for healing ailments that were practically impossible to cure.

Lukas developed a great talent as a prophet and predicted that Romano II would liberate Crete from the Arabs after his death. When the emperor defeated the Saracen Arabs, he commissioned a church to be built in his honor.

One of the most striking aspects of the monastery is found at the entrance. If you look up, you will see a spectacular gold mosaic of the saint. Attached to the abbey is a large church, Katholikon, which in its turn is attached to a smaller temple, or Theotokos, erected between 997 and 1011 to honor the Virgin Mary.

The temples are beautifully decorated with numerous frescoes and mosaics, all perfectly preserved.  Underneath the Katholikon is the crypt where the remains of the saint lie.

Although Hosios Loukas is smaller, the building may remind you of Hagia Sophia in Istanbul or St. Mark’s Basilica in Venice.

The landscape surrounding the Monastery of Hosios Loukas may not be as breath-taking as Meteora, but its green and golden valleys full of flowering almond and olive trees evoke harmony and well-being.

How to get to Hosios Loukas

If you plan to travel to Delphi by rental car, then Hosios Loukas is a must. From Delphi take the highway to Livadeia.  Approximately 25 km down the highway you will see the exit to the Monastery. 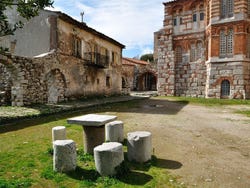 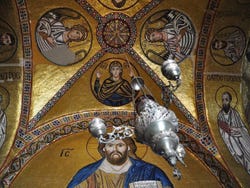 Mosaics in the Hosios Loukas Monastery 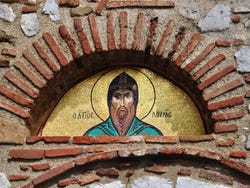