Most cruise ships either depart or dock in Piraeus, the city’s major port, which is located just 10 km from central Athens. Lavrion is the second largest port in the Greek capital also has another port, , which has become with time an important cruise ship hub. Lavrion is approximately 60 km from Athens.

Piraeus is the busiest port in Europe with over 20 million passengers a year. It also ties the mainland with over one hundred Greek islands, and hosts ferries sailing to Cyprus, Turkey, Italy and Egypt.

Connected by metro (line 1) and by bus, it is very accessible from Athens.

The port of Lavrion is situated on the eastern coast of Greece and was a fishing harbor until it was extended in 2004 for the Athens Olympic Games. Nowadays, it has become the second most important port of Athens. All ferries to the Cyclades depart from this port, and it welcomes more and more large cruise ships.

The best ways to travel to Lavrion from Athens is by taxi or transfer service (slightly more expensive, but more comfortable). If you prefer a cheaper option, take a two-hour coach from the city center or airport.

Although Athens is connected to numerous harbors in the Mediterranean, the most popular cruise and ferries are to the picturesque Greek islands, followed by trips to Turkey (Istanbul, Bodrum and Kuşadasi). Other ports in the Adriatic Sea are also a favorite like Venice, Bari and Dubrovnik.

The main cruise companies sail around the Mediterranean between March and November, when the temperatures are pleasant.

There are numerous cruise packages, some of which are only three nights long, so you should easily find a cruise to suit your travel plans. Most tourists who visit Athens combine it with a cruise around some of the Greek islands.

When to book a cruise?

There are so many cruises from Athens that it is easy to find great deals for most dates in spring, summer and autumn. Notwithstanding, if you want a specific type of cabin, we suggest you book in advance.

The only Greek cruise operator, Celestyal Cruises, offers interesting itineraries of the Greek islands and Turkey during 3, 4 or 7 nights. Their medium-size ships can dock in most ports, so the experience is more comfortable and faster.

On board, you can enjoy the typical Greek cuisine, since the company’s priority is for its passengers to discover the Greek culture in depth.

Where to book a cruise?

One of the best websites to compare and contrast cruises around the world is: 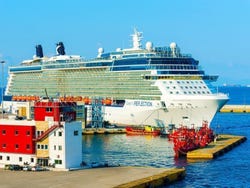 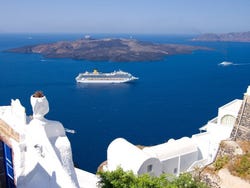