Greek gastronomic tradition is over 4,000 years old and has been influenced by its neighboring countries (both east and west) throughout the centuries.

Traditional Greek cuisine stands out above all for the use of high-quality ingredients characteristic of the Mediterranean diet, in addition to the proper use of spices and aromatic herbs. The protagonist of most of the dishes is the famous Greek olive oil.

We recommend you take a look at some of the most traditional Greek dishes, to get an idea of the varied cuisine that awaits you there:

We’ve decided to dedicate a specific section to two of the country’s most famous recipes: moussaka and gyros.

Moussaka is a type of lasagna with spicy lamb mince, tomatoes, eggplants and a creamy sauce. There are also various versions with potato and zucchini. Like the Italian lasagna, this dish is quite filling and since it is served piping hot, it is the perfect way to warm up on a cold winter night.

Gyros is another extremely popular dish in Greece consisting of pitta bread stuffed with meat (either chicken, pork or lamb) made on a vertical rotisserie. It is accompanied by tomato, lettuce, onion and different sauces. Gyros literally means “to turn”, since the meat is cooked on a vertical sear that rotates very slowly, just like the modern kebabs.

Available in most Greek restaurants and fast food stands, gyros is a specialty that is prized both by locals and travelers.

Restaurants in Athens are relatively inexpensive, a bit like the prices you would find in Madrid or Barcelona. A main course costs between € 8 (US$ 8.30) and € 12 (US$ 12.50) and are normally very hearty.

If you’re traveling around Greece on a tight budget, you can order gyros at any fast-food stand for approximately € 2 (US$ 2.10) or a delicious souvlaki in the city’s numerous taverns.

Unlike other European countries, waiters in Athens will usually serve you water as soon as you sit down even if you haven’t asked for it. Even though the water is not very good, it is free, so you can save on drinks in Athens.

What time do locals eat in Athens?

The Greek meal times in Athens are similar to those in Spain. Lunch is served between 1:30pm and 4pm and dinner between 9:30pm and 11pm. Nevertheless, since Athens is quite a cosmopolitan city, restaurants open earlier for foreigners, so you can eat earlier without any problem. Normally, waiters stand outside their restaurants trying to entice you to enter into their establishments at all hours.

Although most neighborhoods in Athens offer numerous and varied restaurants, the most popular areas are Plaka and Monastiraki.

One of our favorite streets packed with traditional restaurants and charming terraces is Adrianou Street, near the Ancient Agora.

Other good streets are: Mitropoleos Street and Kidathineon Street. 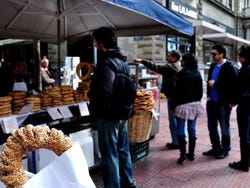 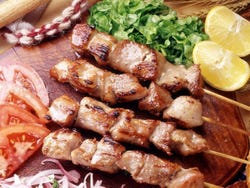 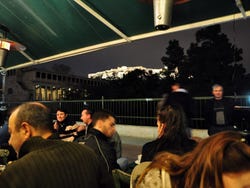 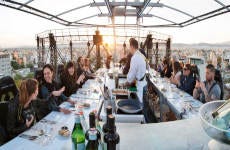 Dinner in the Sky in Athens 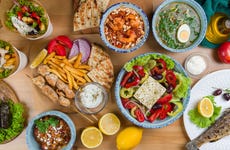 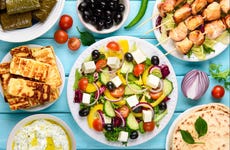