Although most travelers won’t even notice that Athens has a tram network, it is one of the most enjoyable conveyances in the capital, especially if you take the lines that run along the coast, with a view of the Saronic Gulf.

The first trams lines in Athens were constructed in 1882. The first vehicles had up to sixteen seats and were pulled by three horses.

In 1887, Athens replaced the horsecars with steam motor trams, and a few decades later, in October 1908, the city renewed the streetcars with electric trams.

Although the tram was the most popular means of transport during World War II, used by the Greek troops, its use plummeted in the following years. The tram lines were closed permanently in 1960.

The Athens tram routes were reinaugurated for the Athens 2004 Summer Olympic Games. 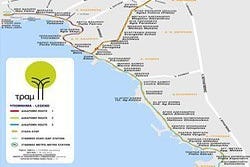 The network has three lines with 48 stops:

Generally, trams run between 5:30am and 1am. On weekends the last trams depart from Syntagma Square at 2:15am.

Check out our section on tickets and fares for up to date information on the various tickets available and prices. 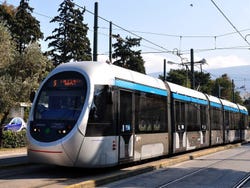