If you have to drive back to the airport from Athens, follow the direction signs marked “Markopoulo Airport”. Sometimes Athens Airport is known as Markopoulo Airport as it is located near the town Markopoulo, to the southeast of Athens.

How to get to Athens from the airport

The fastest and most comfortable way to get to the city center from the airport is by metro. The ticket costs 8€, and it allows you to transfer lines or take another means of transportation for 90 minutes.

There are four express bus lines that connect Athens Airport with the city center and Piraeus port.

All buses cost 6€ and the ticket is only valid for that specific journey. Seniors over 65 years old, youth under 18 years old and university students under 25 only pay 3€.

As well as being cheaper, it is also very agreeable to discover the city while you drive to central Athens, although not all areas of the capital are picturesque. Moreover, the bus platforms are closer to the arrival terminals than the metro station.

The journey in taxi from Athens International Airport to the heart of Athens costs 38€ during the day. Between midnight and 5am, the rate is 53€. The fares are fixed and are per vehicle.

If you hire a transfer service, a professional chauffeur will be waiting for you at the arrival terminal with a sign with your name on it. This arrangement is the most comfortable and fastest way to get to your hotel, especially if you do not speak Greek. A 4-seater vehicle costs 45€. Book a transfer here.

If you prefer to take the train to the city center or to Piraeus, the airport is also connected to the Athens railway station and to the city’s major port.

The train is the least comfortable way to travel to the city center, since this means of transport is not at all regular, and most of the time you’ll have to change trains. The only journey worthwhile taking is to Corinth. A train ticket is 8€. 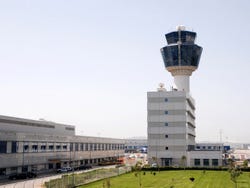 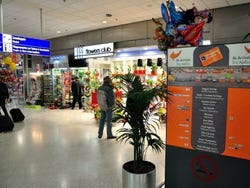 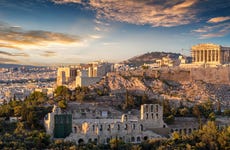 9.7 57 reviews
Free
show all the activities