Agoras in Ancient Greece were public squares where the inhabitants would meet to discuss politics and their quotidian lives. It is also where elections, religious celebrations, athletic competitions and various types of shows were held. Furthermore, they were also important commercial spaces and considered the heart of the city.

The first excavations in the Agora area took place between 1859 and 1912. During the following years, important remains, including large sculptures, were found in a deep trench when the railway tracks were being installed.

Subsequently, 360 modern edifices were demolished to expose the whole Agora. When the entire area was excavated, the Stoa of Attalos, a large building constructed during the Hellenistic period, was rebuilt according to the original plans. Nowadays, it features the Ancient Agora Museum.

The Ancient Agora Museum was founded in 1957 and housed in the Stoa of Attalos, a two-story rectangular building with a long sequence of columns. It was given to Athens by the King Attalus of Pergamon.

The museum’s collection contains various items found during the excavations of the Ancient Agora, like ceramics, jewels, weaponry and coins.

Although most of the buildings in the Agora are not very well preserved, some of the most prominent edifices have been reconstructed extremely well like the Stoa of Attalos, an ancient department store, currently housing the Ancient Agora Museum. The Agora is also home to the Temple of Hephaestus, one of the best-preserved temples of Ancient Greece. It was built between 449 and 415 BCE.

The Ancient Agora is one of the capital’s most special landmarks. Although most of the area’s constructions are badly damaged, the historic importance of this archaeological site make it a must-see visit for all visitors. 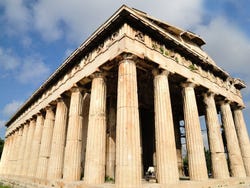 Temple of Hephaestus in the Ancient Agora 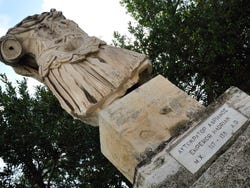 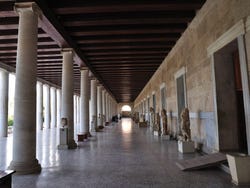 Adrianou Street, to the west of Monastiraki.