Enjoy a traditional Greek dance show in the famous Dora Stratou open-air theatre located on Philopappou Hill. Let the rhythms take you away! 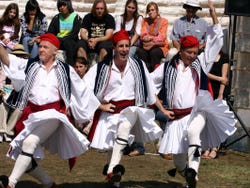 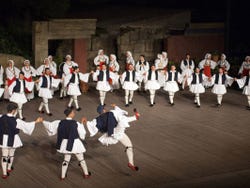 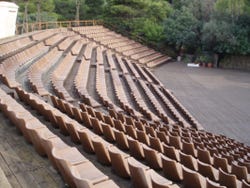 Located on Philopappou Hill, also called Muse Hill, the iconic Dora Stratou Theatre is an open-air auditorium which recrates the legendary amphitheatres where the Ancient Greeks would watch mythical theatre productions. The venue is named after Dorothea Stratou, an Athenian intellectual who dedicated much of her life to promoting and spreading traditional Greek folk music and dance. Her books about Greek folklore contributed a huge amount to these popular dances, whose traditions have remained strong over time.

As night falls over Athens, you'll enjoy a passionate dance performance at the Dora Stratou Theatre. In the perfect traditional setting of the Philopappou Hill, you'll watch the folklore show with the background of a beautiful sunset.

The dance show, which lasts approximately 90 minutes, tells Greek folklore tales through traditional dancing. The musical representation means that anyone, regardless of their native language, can understand and enjoy the magic of the show!

A cast of 75 will perform the most traditional music and dance pieces of the country in typical Greek dress: a true cultural immersion that you'll never forget!

All of our providers comply with local legislation and applicable health recommendations to avoid the spread of Covid-19.

You can book up until the same day (7:15 pm) if there are still places available. Book now to guarantee your spot.

All services published on Civitatis are carried out in accordance with our Sustainability Code.

Free! Free cancellation up to 24 hours before the activity starts. If you cancel under this time or do not show up, you will not be refunded.

8.60 / 10 384 reviews
Explore Classical Greece on a full-day trip to the Corinth Canal, Epidaurus and Mycenae. You’ll delve into the history and culture of Greece by discovering the Argolis peninsula.
€ 100
Book
like

7.60 / 10 619 reviews
Discover three beautiful Greek islands on a full-day cruise of Hydra, Poros and Aegina and enjoy a peaceful day far from the hustle and bustle of Athens.
€ 100
Book
like

8.50 / 10 728 reviews
Join a 5-hour guided tour of Athens and visit one of the most important museums of the capital of Greece accompanied by a professional guide. Ideal for first time visitors!
€ 84
Book