The area is also famous because it houses the largest cemetery in Greece, used by the Romans during the sixth century AD.

Themistocles built a city wall around Athens in 478 BC to protect the Agora, dividing the neighborhood of Kerameikos in two. Since it was customary for the Athenians to bury the deceased outside the city, the outer part of Kerameikos became the city’s largest and most important cemetery.

Over the years, the cemetery was forgotten and remained buried for several centuries, until Pireos Street was built in 1862 to connect Pireos and Kerameikos. During the erection of the road, the first funerary monuments were found, which nobody knew the existence of.

Although the findings were given importance at first, they were quickly forgotten. Years later, a man who was on the site collecting earth, stumbled upon a large sculpted marble block. As a consequence, the Greek government bought the plot of land and began to dig up the cemetery.

Nowadays, the archaeological site is open to the public. While wandering around it, visitors will enjoy the peaceful atmosphere that envelops the last resting place of the Ancient Greek citizens. The cemetery houses several tombstones and funerary monuments (although the latter are almost practically destroyed and require a lot of imagination to interpret them).

The various collections made up of statues, urns and other funerary monuments, are displayed chronologically in four different rooms. 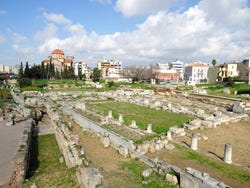 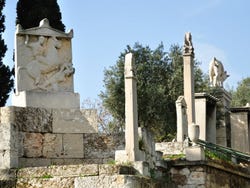 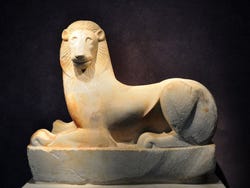 At the end of Ermou Street, to the west of Monastiraki Square.