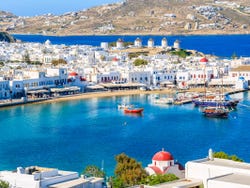 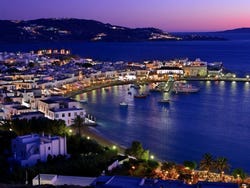 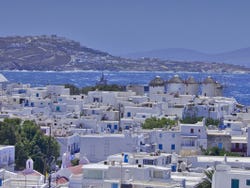 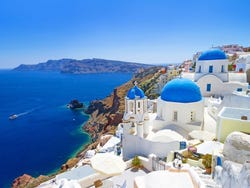 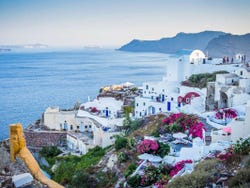 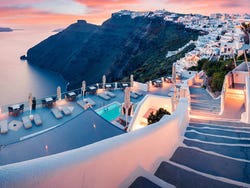 Having picked you up from your hotel first thing in the morning, we'll take you to El Piero port to climb aboard the ferry to Mykonos. Following four hours, enjoying the incredible, sun-drenched views of Syros and Tinos, you'll arrive in Mykonos, where we'll pick you up and take you to your hotel.

You'll have the rest of the day free to see the windmills, famous white houses, quaint churches and tranquil beaches. And when the sun sets, don't miss the nightlife that has made the island famous!

You'll have the rest of the day free to explore the island, where the unmissable sights include Oia, the most picturesque and famous of the villages on the island as well as Fira and Akrotiri, the capital.

This day is totally free, and you can take advantage to visit the unusual red, white and black beaches, and the volcano which has shaped the island itself.

And if you don't want to make your own way around the island, there will be various excursions on offer!

You'll have free time in the morning, in case you missed anything, and for you to have lunch in one of the various bars and restaurants with views of the volcano. Then after eating we'll take you to the port so you can take the ferry back to Athens.

The boat arrives back to Athens at 11:45 pm, meaning we'll drop you off at your hotel at around midnight.

This trip includes the boats from Athens to Mykonos, Mykonos-Santorini and Santorini-Athens. It includes 1 night in the hotel in Mykonos and 2 in Santorini, with breakfast and return transfers from all hotels and ports. The price does not include any guides.

The prices shown are for the low season (year-round except for July and August) with accommodation in double or triple rooms. When choosing your desired dates on the calendar, you will be shown the relevant prices.

All of our providers comply with local legislation and applicable health recommendations regarding protective material and safety to help avoid the spread of Covid-19.

* The price varies based on the chosen date

All transfers from port to hotel and back.

Boats between Athens and the two islands.

Accommodation with breakfast as selected.

Show the voucher on your phone to take part in the activity.

No, not suitable for people with reduced mobility.

from
US$ 681.80
No hidden fees or surcharges
Free cancellation up to 3 days before
Book

I travelled with my partner
Show all the reviews
like Free

9.80 / 10 158 reviews
Live and breathe the five thousand year history of Athens, the foundation of European culture itself, in search of the traces of Plato, Archimedes and Zeus
Free!
Book
like

8.60 / 10 352 reviews
Explore Classical Greece on a full-day trip to the Corinth Canal, Epidaurus and Mycenae. You’ll delve into the history and culture of Greece by discovering the Argolis peninsula.
US$ 119.60
Book
like

8.60 / 10 518 reviews
Embark on a full-day trip to Delphi from Athens and discover what was once believed to be the center of the world and now, one of the most popular destinations in Greece.
US$ 112.40
Book